The Return of Portishead 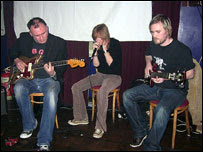 Portishead is back with a new album coming out in April according to Pitchform Media There's been rumors of them performing at the upcoming Coachella Festival but no concrete sources has confirmed this. Earlier in 2007, Portishead played a surprise show in Bristol at the Grumpy Man DJ night at Mr Wolfs. You can see in the haunting version of Wandering Starts video Geoff doing some nice volume swells on his guitar and great slide work with reverb. Beth's vocal performance is always top-notch as she plays a theramin-sounding melody during the outro of the song. No name has been released for the upcoming album. (photo courtesy of bbc.co.uk)

Hey Alfred - it's Mark Rossmore from the old skoole Miami Dade days. How've you been man? I was thinking about you the other day as I was watching the trailer for The Whisperer in the Darkness from the HPLCHS. Have you seen their kickass silent movie version of Call of Cthulhu?

I've been keeping up with your music and bought your CD a while ago. Awesome work - you've come a long way and truly created your own definitive style.

How's United A been treating you? Funny how we're both involved with aviation now, but from two different directions. I'm an air traffic controller (trainee) in Pensacola now.

I've had my own blog covering music and ATC for a long time. Give it a read if you get a chance. I just got certified on my first radar positions, so things are looking good.

I'm still working on my own music in my home studio. You can hear some of it on my "band's" MySpace page: http://www.myspace.com/iescapetheclouds

Anyways, drop me an e-mail or a blog comment. I'd like hear what's going on with you down in Miami. mark.rossmore-at-gmail.com.